Rethink and reshape the way you work

01 May Rethink and reshape the way you work

Posted at 09:00h in Meetings by Independent Audit
0 Likes 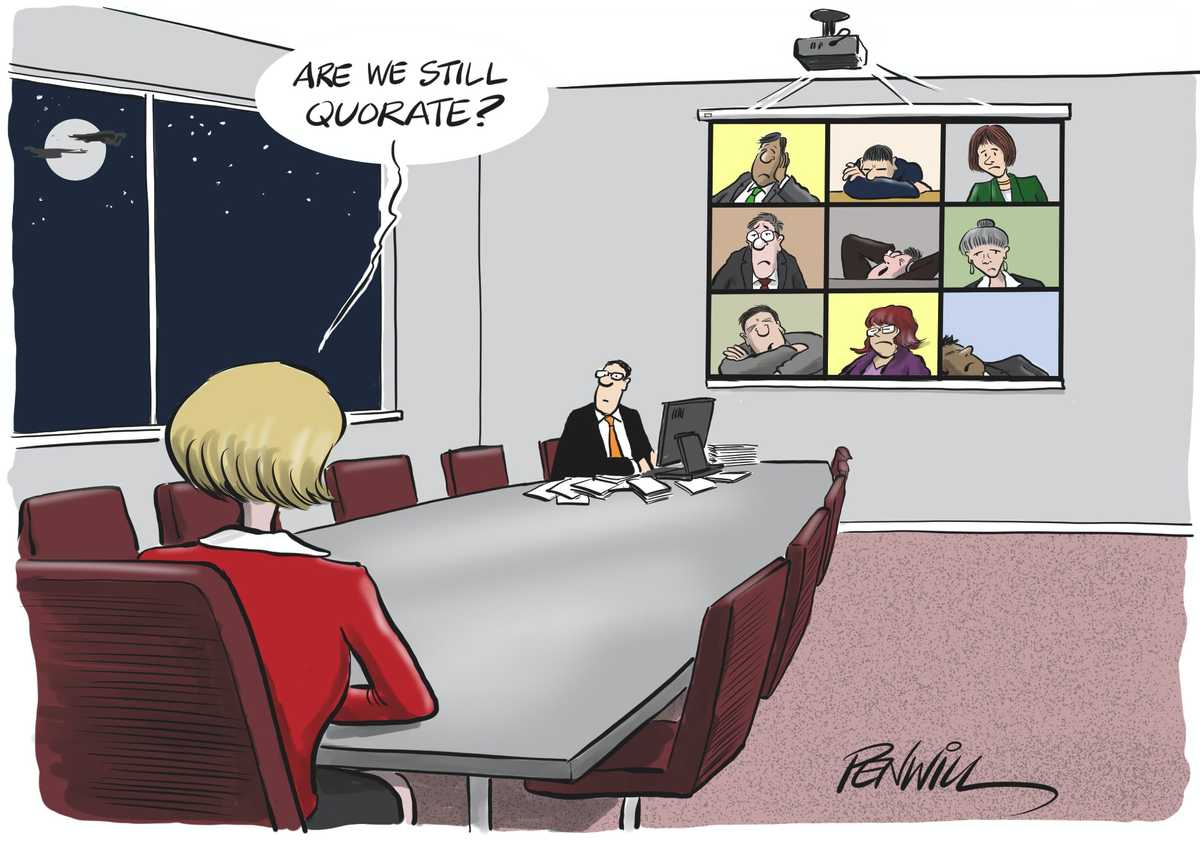 Being a good Board isn’t just about what you do, but also about how you do it.  And trying to carry on as you did before the crisis isn’t going to work.  We’re not talking only about the virtual board meetings that are now normal and will remain so for at least a good few months yet.  It goes much further than that, and covers almost every aspect of how the Board is organised and operating.  Trying to carry on with the same meeting structures is likely to make life unnecessarily difficult for everyone.  And then there’s “the softer stuff” – the non-quantifiable matters, often people-related, that boards find tricky even when everybody’s in the same room.  Here we look at both aspects, highlighting good practices and things to avoid.

Work out the role of the Board during the crisis.  It can be hard to strike the right balance.  On the one hand the Board needs to stay fully informed, express opinions and give advice – which all take up management time.  And, on the other hand, it’s important to let management get on with it.  The right balance is likely to revolve around what boards are good at – bringing a detached view, free from the hurly burly of day-to-day management, which draws on the experience of many years and (possibly) of many crises.

Letting management and the Board get in each other’s way.  It’s understandable that the NEDs will want to stay informed but that alone might not add much value and could be a very unwelcome burden.  Weekly meetings to update the NEDs will take up time and NED pontifications will be even less welcome than before.  But time spent ensuring that management doesn’t lose sight of the big picture and keeps the right priorities – that’s useful.

Take a scalpel to the board packs for virtual meetings. Attention spans are shorter on video – even less on the phone – so virtual meetings need to be shorter. That means no time can be wasted, and a board or committee needs to get straight to the issues. Directors need to be prepared by means of good overview summaries that frame what needs to be discussed and why it matters. And there must be a ruthless weeding out of unnecessary detail, verbiage and pages that management just happened to have already prepared. Unemotional “downsizing” has to be the name of the game.

Continuing to stagger through hundreds of portal pages and well-intentioned but overwhelming detail, when you know that what the meeting will need is a laser-sharp focus. Even pre-crisis, most boards struggled with pre-read papers that weren’t fit for purpose, making directors’ lives harder and reducing their ability to contribute. Now, poor board papers are an unaffordable indulgence. Crises drive changes in behaviour – so this is the opportunity to require an all-out effort to simplify and shorten the papers. And most boards will be better for it.

Demand precision, prioritisation and practicality in the pre-read papers. Tell management what you want to know, then make sure it’s relevant to the main challenges and to what the Board itself needs to do. Take great pains to ensure management don’t spend time preparing material that they think you need, rather than what you do need.

Assuming the Board wants the fullest possible picture. Information is needed, but maybe not in the way that people will assume. Instead of time-consuming preparation of papers, a quick verbal update might work better. Or a two-pager to kick off the discussion. There’s no set recipe but a good dialogue is needed to make sure that it’s clear what information and discussions are really needed at a time when the demands on management are unrelenting.

Drop the presentations. It’s difficult at the best of times to sit through lengthy slideshows that use most of the meeting time to restate what you’ve already read about. Giving the Board good opportunities for discussion matters now more than ever.

Allowing management to think that you expect “a presentation”. You probably don’t – possibly never did – even though that’s what they conscientiously produce. The Chair and Company Secretary need to give a clear steer to those who are sponsoring agenda items.

Have the right people in the room. That will mean a legal focus from the Company Secretary or the General Counsel – there are probably a lot of legal risks building up. And risk, control and assurance will need to be more firmly on the full board agenda.

Leaving the risk work to the committee. Yes, the detailed work is still going to have to be done there. But the strategic consequences of many of the risks – and the risk consequences of many strategic discussions – now mean boards will want to hear first-hand from expert managers and advisors who might not have needed to attend before.

Construct a different meeting schedule. Partly to recognise that virtual meetings will demand a different tempo. But also to avoid executives being tied up in day-long blocks of board meetings. In crisis times, you can’t expect their undivided attention for hours on end, so it’s best not to tempt them to try and multitask while the meeting is in progress.

Carrying on regardless with the standard structure of back-to-back committees followed by the Board – with bed and breakfast in between if you’re lucky. It’s pretty much impossible to sit through hours and hours of virtual meetings. As nobody is travelling, there’s no need to schedule all the meetings over a day or two. Split up the committee meetings as much as you can and consider having a gap between committee and board meetings.

Reshape the agenda. That’s partly about dealing with formal matters differently. But it’s more about focus. Why stick to traditional agenda formats when you just want to get to what’s critical? Structure the agenda around the big, top-priority themes, drivers and risks.

Sticking to the conventional agenda structure (minutes, CEO Report, CFO Report, Governance…) that encourages backward-looking reporting. If ever there is a time for looking ahead, it’s now.

Shift the focus when you can. Today will be about the crisis response and resilience. But tomorrow will need to be about the new stakeholder environment, strategy redesign and the new risk environment as organisations strive to emerge with their reputations intact.

Assuming the “normal” everybody is striving to get back to will be the same as the one we left. It’s possible that it will be, of course. But there is also a real possibility that the social, political, fiscal, economic, stakeholder and investor environments will emerge from shock in a different state, with shifted expectations and demands. Boards need to make sure that management are preparing for future success in different scenarios.

Get more comfortable with ambiguity. Boards are used to dealing with uncertainty when looking at new things, but the pervasive day-to-day uncertainty we have now is something else. They need to be constantly aware that a different way of thinking may involve accepting the unknown, weighing up the unlikely, and accepting the possibility of the impossible.

Getting lost in a search for certainty, process and predictable outcomes. Any comfort you get from this will be misleading – the reality is that no-one knows what’s going to happen next, and the range of possibilities is greater than anyone could have imagined only a few months ago. So, the Board has to ensure the business is prepared to survive – in fact, to take advantage of – all sorts of scenarios.

Get more comfortable with the less tangible, people-side of board business. Boards like measurability and find it tricky to deal with non-quantifiable things such as culture, welfare and people policies. But these aspects are crucial to keeping the business going today and being ready to respond nimbly to tomorrow’s opportunities. Some boards will have to consciously adopt a different mindset.

Hoping that the soft stuff will take care of itself. It won’t, and the Board needs to know that management is up to the challenge of keeping the culture and morale intact. Hard decisions will have to be made, which will need the Board to help management steer a course between the various pressures of short-term financial stability, obligations to employees and contractors, and reputation-preservation for the long term. There are few definitely right answers in this territory.

Exercise leadership, even though it’s not always clear what this looks like for a board. For the Chair, the CEO and other executive directors it should be obvious. But, for NEDs, it’s less clear what shape this takes in practice – so they need to work it out. Maybe it will be around the people and welfare message, the positioning with stakeholders, social contribution, emotional support for management – or more in the clarity of its decision-making and around future strategy, risk-taking, remuneration and employment policies.

Failing to recognise that what’s needed from the Board is different. Of course, that’s as uncertain as many other things. But the scale of the crisis suggests that the CEO is likely to need the Board to do more than stay in the background. Each board will need to work out what leadership looks like well into the future. Then, having settled on a role and style, boards will need to constantly ask themselves how far they are living up to their commitment in their discussions, decision-making and visibility, and how well they are performing as a team.

Make the time. All this is difficult. It probably won’t be possible to tackle it within normal board time. Directors will have stepped up to make the time available during the crisis, but that will probably need to continue even when the immediate emergency is over. Reflection, debate, and decision-making will need more hours and days given the immensity of the tasks and uncertainties.

Trying to fit it all in within the usual board meeting time allocations. That’s going to be tough, especially with virtual meetings. Either boards are going to have to become a lot more efficient – or more time will be needed. And even if the meetings do become a lot tighter, the big strategic discussions will demand more than just an annual strategy day.

Ready to speak to a board evaluation specialist?

Learn how we help boards to become more effective and have a bigger impact on strategic performance.