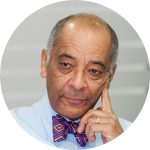 Sir Kenneth provides a steadying hand as our non-executive Chairman, bringing many years of experience as a technology entrepreneur and investor, as a past regulator (PostComm and IPSA) and as a non-executive director of a wide variety of organisations including Thomson Reuters and Huawei UK.

He is known for supporting the highest standards of corporate governance in all aspects of his work – standards which he actively promotes at Independent Audit too.

His commitment to community shows through in his work for the socially excluded at Thames Reach and Shaw Trust. He is honoured to be HM The Queen’s Lord Lieutenant of Greater London. He recently became an Honorary Chartered Director of the Institute of Directors.